Careful of What You Flush Down Your Toilet!

Home > Blog > Careful of What You Flush Down Your Toilet! 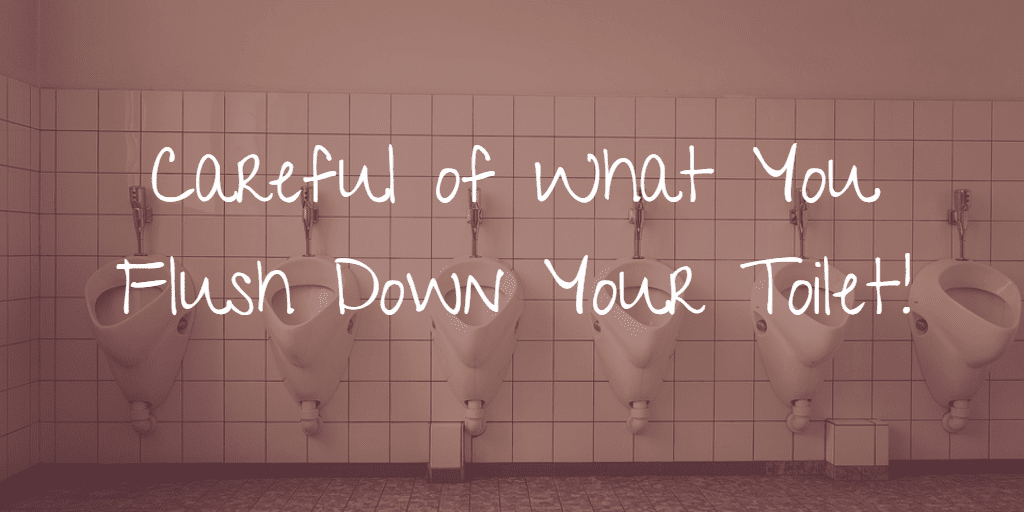 Even though the first toilet was invented in England in the 16th century, the flush toilet as we know it wasn’t a part of people’s daily lives until the 19th century, so basically humankind has been enjoying this invention for a little more over than a century. The ubiquity of this modern convenience urges some homeowners to take it for granted, so they flush down their toilet drain all kinds of stuff, using it as their personal trash disposal.

Although it seems great having a trashcan that promptly disposes of its trash and smells, your toilet and septic system are designed to handle only human waste and toilet paper.

In this article you will find out what things shouldn’t be flushed down your toilet drain. Otherwise, plumbing problems and environmental pollution are guaranteed.

Grease, oil and fats when melted can easily be washed down the drain, but eventually they cool down and form the build-up on the sides of your pipes, making the pipe opening smaller and smaller over time like a clogged artery.  You do not see it, but your pipe is gradually clogging to an extent that one day it can back up or worse. Scrape the cooled grease into the trash instead.

While these products might be marketed as “flushable” or “disposable”, the truth is that they are far too thick to be flushed.  Even the ones that read they are safe for septic systems or sewers. A city in Minnesota is suing six manufactures of “flushable wipes”, since their wipes have already caused huge problems with the city sewer systems.  The wipes don’t degrade after having been flushed and end up costing the city thousands of dollars of damages.

It might seem like these tiny bathroom accessories would just bloat and break down in the watery pipeline, but they wouldn’t, instead they would collect in pipe bends, as a result causing massive blockages.

Don’t ever attempt to flush condoms down the toilet drain. Wrap them carefully and just throw them away in the trash.

Cigarette butts serve as a filter when you smoke, thus they are full of extremely toxic chemicals that just go into the general water supply. And besides they won’t flush that easily, unattractively floating in the toilet water, so to flush them off, you’ll have to use a significant amount of water. The best solution would be to quit up smoking, in this case you won’t get any cigarette butts to flush.

Dental floss isn’t decomposable and while one small thread of floss may not seem too bad, just imagine what happens when a whole bunch of dental floss starts tangling together. It is best to throw your dental floss in the trash after the flossing.

Some people believe that to throw hair into the trash is omen of misfortune, so they try to dispose of it in all kinds of weird ways, including flushing the hair down the toilet drain. Consequently hair clogs showers, sinks and toilet plumbing.  The hair forms giant balls which trap odors and cause immense blockages in pipes, plumbing and sewers. In fact, hair is responsible for more clogs than any other items on this list. Throw your used hair into the garbage or even compost it.

Cat litter is made of clay and sand, these two items should never be flushed down the toilet. Do not forget that cat waste also contains toxins and parasites that are not supposed to be in your water system.

The list of things that shouldn’t be flushed down your toilet drain could go on and on, but remember three things that can be flushed – they are number ones, number twos and toilet paper. Don’t run a risk of using your toilet as a garbage disposal, because plumber calls usually happen at the most embarrassing and inconvenient times. However, if you ever face the plumbing issue with your toilet, do not hesitate and call Norwalk Plumbing Heating & Air Conditioning – your #1 plumbing and HVAC contractor!

FIND US ON SOCIAL MEDIA

“Just a quick note to say thanks for saving me a lot of money! When faced with the possibility of tearing up a concrete driveway to repair the water main, your technician suggested another option that worked perfectly. It saved my driveway and my pocketbook.”